Vasectomy is one of the safest and most effective methods of permanent birth control.
Vasectomy is considered one of the best forms of contraception and definitely the best choice for men if they want to take personal control of any future pregnancies.
It is much safer and less expensive than tubal ligation. For these reasons, every year more than 500,000 men in North America choose vasectomy. Introduced to the United States in 1985, No Scalpel Vasectomy (NSV) differs from conventional vasectomy in its surgical approach.
Around 30,000 men have a vasectomy performed every year in Australia.
It does not require the use of a scalpel or knife. Instead, the physician carefully isolates the vas deferens with his fingers and uses a specially designed instrument to make a tiny opening in the skin. The vas deferens are delivered through the skin, cut and sealed to block sperm. No stitches are needed to close the opening, which heals quickly, with virtually no scarring.

This technique of performing a vasectomy is what is called "Minimally invasive surgery". This method leads to a more pain free procedure, less chance of complications after the procedure, and a much shorter recovery time.

Dr Bull performs an OPEN ENDED vasectomy which means that the lower end of the vas deferens is left open so the sperm can drain into the scrotum and be absorbed. This theoretically means less pain and engorgement in the scrotum.

Dr Bull cuts the vas deferens, burns the top end and then covers it with tissue from near the tube. This technique is call MUCOSAL-CAUTERY and FASCIAL INTERPOSITION. This method is considered the best among most vasectomists.

So there are three things done to stop the travel of the sperm up the tube:

Anaesthetic for a No Scalpel Vasectomy

We use a very tiny superficial injection to the scrotal skin The area that needs to be anaesthetized is very small so only minimal anaesthetic needed. There is minimal discomfort with this and we always inject slowly and gently. Most men will say that there is little discomfort .

We will discuss the procedure in person to determine the suitability of no-scalpel vasectomy for you. Among other things, we will go over your health history as it relates to vasectomy, and you will receive a brief physical examination. At some point, you will be required to sign a consent form. It will state that you understand vasectomy and its potential risks and complications.

Prior to booking in for your Vasectomy, be sure that you are informed and comfortable with your decision. It is important that you fully discuss and resolve with me any lingering questions or concerns you may have. 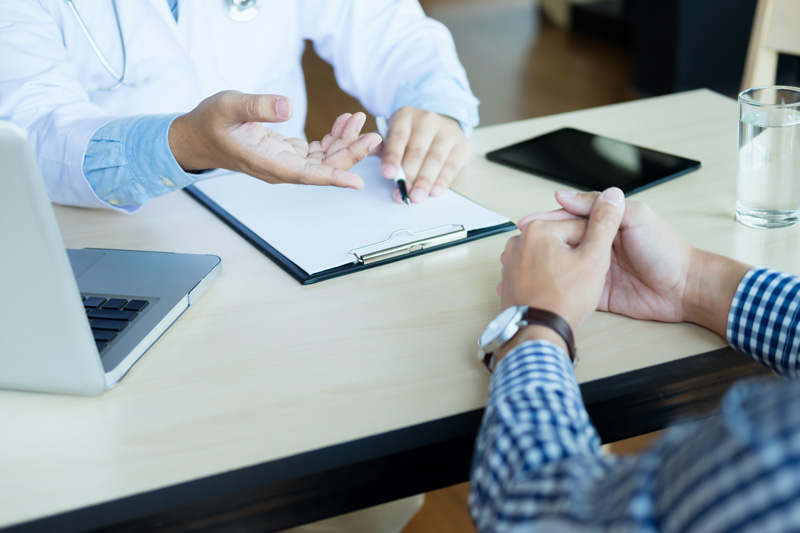 Are there potential complications?

Yes. All contraceptive methods carry some risk as well as benefits. Vasectomy is a very low risk procedure, but complications are possible.

1How will vasectomy affect me?
Vasectomy is NOT castration. Vasectomy only interrupts the tubes that carry sperm from the testes to where they are added to your semen. Your penis and testes are not altered. All hormonal and sexual functions are completely unaffected, so your voice, body hair, and interest in sex remain the same. Your body still produces semen, and erections and ejaculations occur normally. The only difference is that your semen will no longer contain sperm. As before, the body naturally absorbs unused sperm.
2Can I discontinue other birth control methods right away?
No! Sperm can remain in the vas deferens above the operative site for weeks or even months after vasectomy. You will not be considered sterile until a post-surgical semen test has shown that no sperm remain. Until then, you must continue to use other birth control to prevent pregnancy.
3 Does Vasectomy pose long-term health risks?
Many studies have looked at the longterm health effects of vasectomy. The evidence suggests that no significant risks exist. Men who have a vasectomy are no more likely than other men to develop cancer, heart disease, or other health problems. In 1993, a panel assembled by the National Institutes of Health, the Association for Voluntary Surgical Contraception, and the National Cancer Institute reaffirmed that conclusion. The panel advised that physicians continue to offer vasectomy and that all men, vasectomized or not, receive the same regular screening for prostate cancer and other illnesses.
4Can vasectomy be reversed?
In many cases, it can be. However, it's expensive and does not guarantee returned fertility. Vasectomy should therefore be considered a permanent procedure. If you're thinking about reversal now, perhaps you should take more time to decide whether vasectomy is right for you.
5Is vasectomy painful?
No. You may feel mild discomfort when the local anesthetic is given. After it takes effect, you should feel no pain, though some men feel a slight' tugging' sensation as the vasa are manipulated. After surgery you may be a little sore for a few days. Generally, two to three days rest is recovery enough before men return to work and most normal, non-strenuous physical activity. Sex can usually be resumed 7 days after the procedure.
6Time off work
Non Manual Workers can often go back to work the next day but may choose to take 1-2days off. Manual Workers are advised to take at least 2 days off. Heavy Manual Workers may require a few days more.

1. Please download, print and sign the Elective Surgery Informed Consent Form, and bring it with you on the day of the vasectomy.
2. Aspirin and non-steroidal inflammatory drugs may increase bleeding. Try not to take these for a week before your vasectomy. This is not 100% essential though and if you really need to you can continue to take them.
3. The day before, shave, trim or clip away the hair from the front and sides of the scrotum below the penis.
4. To reduce the risk of infection, thoroughly bathe the scrotum and groin the day before and the morning of the surgery.
5. Several hours before surgery, take any preoperative medications as directed.
6. Please wear tight fitting briefs to your procedure, and bring a second pair to put on as well after the surgery, to give maximum support to the testes post operatively.